A concussion is a mild traumatic brain injury, which is 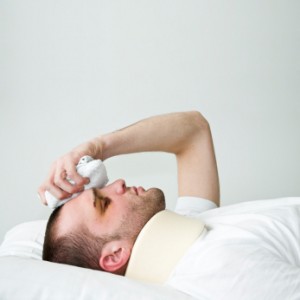 abbreviated TBI,  that involves some sort of blow to or a back and forth movement of the head.  The cranial bones will often misalign because of the impact. This upsets the normal structural pattern that exists between the interlocking bones of the head, and it is unlikely for the head to resume its original position without treatment.

This can lead to longer lasting symptoms called Post Concussion Syndrome or Traumatic Brain Injury or simply TBI. These are complex sets of neuropsychological disorders with symptoms lasting weeks, months or even years after the initial injury.

After a Concussion or TBI

TBI patients complain mostly about problems with their memory, mood and ability to concentrate. However, TBI’s myriad symptoms include the following and more:

Symptoms often come in groups. For most people, they appear seven to 10 days after a concussion and last up to three months. However, some symptoms can last a year or more.

People with a history of boxing, auto/bicycle accidents, falls or other head injuries have dramatic results using Endonasal Cranial Adjusting with a balloon.  A metaphor would be that of a car accident.  The car is dented and to fix the dent by pushing the dent from the inside out would make most sense.  With Endonasal Cranial Adjusting a skull that has changed shape or become fixated due to a head trauma can be pushed back out via an endonasal balloon.

Hippocrates, the father of modern medicine, wrote about the bones of the skull misaligning at the joints.

It’s not too late.  Even years after a TBI, benefits can be realized.  Restoring cerebrospinal fluid flow, blood flow and intra-cranial space is essential for optimal brain function.

To schedule an appointment with Dr Fields please use the link below: